The Lovely Eggs topped out their UK summer cavalcade in front of a packed crowd at Liverpool’s District venue, a rare visit to the city from the Lancastrian duo who brought with them Brighton based AK/DK and poet Thick Richard.

I was aware of AK/DK having previously bought both their ‘Patterns/Harmonics’ release, and the current ‘Shared Particles’ album, though this would be the first opportunity to see them live. That said performing with two drum kits, and a rack of synthesizers, and effects units does eat into any shared stage square footage – as such the Brighton based duo were squeezed into a darkened side section, though they didn’t let this hinder them.

The almost playful patterns of Kosmiche #1 kicked things off, before that solid motorik beat hammered home to platform the treated vocal mantras, layer upon layer of rhythmic noises wrapping around you; watching them craft the live loops for Feeds, a momentary glance and the beats explode, the precision of the twin drumming was exquisite – it was clear AK/DK were having the time of their lives, equally apparent are the influences, the aforementioned krautrock, but on tracks like Morphology its clear bands like Suicide, and Devo and have cast some of their vitriol into the mixing pot, add to that dance artists like The Chemical Brothers, Apollo 440 and you should begin to get the idea, this is an utterly kinetic performance, the patterns and noises forcing you to move.

I missed Thick Richard – apologies, but I will ensure I see him at the next opportunity.

The Lovely Eggs take to the stage, it’s a compact venue so there was unlikely to have been any drama captured for the ongoing Stage Door Entrances video series (follow the band on Facebook), David positions himself stage right, wife Holly to his left wearing yet another green screen worrying pattern dress holds a can of Strongbow aloft before they launch into the trippy Long Stem Carnations from the current, I Am Moron album, immediately an audience starved of live music for 18 months respond, a mass of bodies dancing, and smiling together feeding into the energy of the event. This Decision is brutal, the perfect blend of adrenaline laced punk and cosmic visitations, Holly entwined around her guitar before holding it aloft as she relentlessly rips those chords from it, things drop back for the anthemic You Can Go now – the Lovely Eggs clear out which includes everything from Anthea Turner though to Zip-Lock bags, and heavyweight denim – but I can’t agree with salted popcorns banishment!

Holly acknowledges the lockdown, her time wasn’t wasted, telling us that she has expanded her cider menu to include Thatcher’s before the screech of ‘I Want You’ opens a taut and sinewy Witchcraft, sadly the venues sound was at times muddy, so some of the inter-galactic bleeps and pulses were lost – not that the seething mosh pit were concerned, a sea of bodies pinballing off of each other, David commenting that its good to “be back up North”. 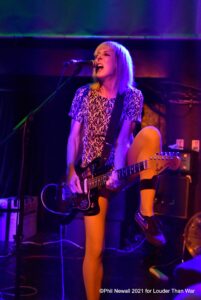 Magic Onion morphed into a dark foreboding almost Heart of Darkness moment, Hollys almost laconic title chant over that tribal beat, the perfect setup for Wiggy Giggy which induced a euphoric audience sing-a-long as the crowd shook the long lockdown, and that feeling effortlessly rolled into the cathartic ‘Fuck It’ as the song climbs to that exalted mass sing song; once again The Lovely Eggs bring the party to town, continuing with a blistering Still Second Rate as Holly pirouettes around the purple washed stage ahead of the stuttering Insect Repellent and an arc right back to where it all began with I Like Birds But I Like Other Animals Too from the bands 2007 self released debut EP before joyous closer Don’t Look At Me (I Don’t Like It) which sent us all home with a washing line smile, and our sausage roll thumbs firmly in the air!

All words by Phil Newall. More writing by Phil can be found at his Louder Than War Author’s Archive

Milk & Honey is making a splash in Australia and New Zealand.

Milk & Honey is making a splash in Australia and New Zealand.The Los Angeles-based music and sports management firm expands into these...

DKist shares heartfelt release, “ALL or NOTHING” [Video]